4 Nigerians Talk About Ridiculous Clauses in Their Contracts 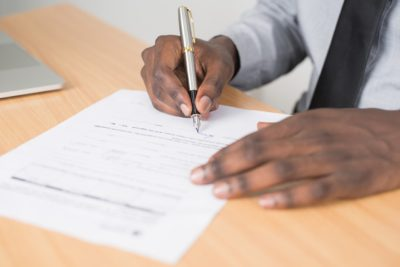 Signing a contract can either make or break your career journey. Scribbling something on a piece of paper can make you the happiest person or send you down the rabbit hole. To avoid regrets, you must get a lawyer to go over a contract before you sign. Because no matter how ridiculous the deal might sound, if you sign it, you’ll have to fulfill it. To help you with this, we’ve decided to share ridiculous clauses from contracts to help you see reasons to take this seriously

First on our list of ridiculous clauses is Ayomide.

I was supposed to be at work whenever my boss needed me, regardless of the day of the week.

I was just starting this new job and I had worked there for about three months when I got a call from my boss. It was a Sunday morning, so I was surprised when he called and demanded I resume work. I told him it was Sunday and I had to be at church. His next few lines had me shocked. He told me he had left me all this while because he wanted me to get comfortable. He reminded of what was in my contract; "You may be required to work on weekends as deemed necessary".

I argued that I didn’t sign anything like that, he cut the call and sent me a text saying he was waiting for me. As the call ended, I searched my file for my copy of the contract. I saw the clause somewhere written in tiny fonts. Ever since then, I read my contracts till the last letter.

Okay, so I got this job with an accounting firm, and I was so happy when I received the email. I called my friends, family, and everyone was happy for me. They sent me a contract, and I was to sign if I agreed to their terms. In my mind, I wanted to sign and send it immediately to show I was serious. But a friend who was with me at that time said I should go over the contract with another lawyer friend.

I placed a call, and we started talking; she asked that I send the contract, and I did. Later that night, she sent me a Whatsapp message asking if I planned on getting married soon or having kids. The question was a surprise because I had just finished NYSC. She then told me that my contract stated I couldn't get pregnant within the first three years of my appointment. I took the job because I was young, and childbearing felt so far away. But imagine if it was someone looking for a child; it felt weird.

For every time I came late to work, a thousand naira would be deducted from my salary.

This was not a contract, but it was supposed to be a verbal agreement with the HRM. During my interview, I was told that to prevent staff members from resuming late, there was be a fine for latecomers. I was thinking, okay, we’d pay a hundred Naira to the receptionist or something around that. I decided to ask her when can I be flagged as latecomer? She said, anything past resumption time, which is by 8.

So, anything from 8:01 is late, and a thousand naira would be deducted from your salary. I looked at her, looked at the salary they were offering. The thought of Lagos traffic danced in my head, and I laughed so hard. I shouldn’t have, but I did; I never went back there. If they remove one thousand from 30 thousand, how much is remaining?

Last on our list of ridiculous clauses is Chibusoma.

Salary review was every three years

I was already working there for about six months. I was crushing KPI’s and was just balling at work generally. My supervisor complimented me on almost every task. You get the picture I’m trying to paint, right? One day I talked to my mum, and she asked when they were going to increase my salary per my efficiency. That night I thought about it and decided I was going to ask when I got to work.

I asked my colleagues how often they review salaries, and everyone started laughing. I did not get the joke, so I went to meet the HRM. She asked me, “did you not read your contract?” I went to my seat, opened my contract from my email, and saw I still had two and half years of receiving 50 thousand Naira. I was so frustrated. And I had to give a two months notice before resigning. If I wanted a promotion every 2-4 years, I would have worked for the federal government.

Contracts are necessary, but before you sign one make sure you seek help from professional legal practitioners. Ridiculous clauses might be hard to spot, but not to a lawyer. Lawyers are more experienced in dealing with these kinds of situations. You don’t want to end up in a job you don’t like without having a way out because of something you signed.