Dating at work: I dated my colleague and it ended in tears 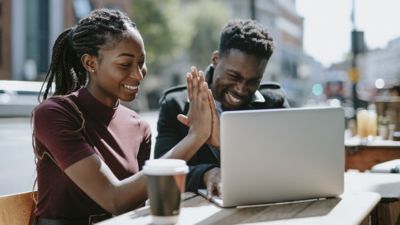 Dating at work is a little bit dicey; apart from some organizations kicking against it, you need to separate pleasure from work. Now, we know it’s hard to see your significant other and not want to be all lovey-dovey, causing your co-workers to chorus “God when.” Perhaps you should find a way to tone it down a little.

We spoke to Ifeoma, a digital marketer who once dated a colleague at work, about how she handled the dynamics of dating at work.

How did he approach you?

Well, I just started working there at that point, and the HR took me around the office. That was the first time I met him, let’s call him Daniel. We exchanged pleasantries, and that was all. A few days later, I was heading home when I met him on the road. We were heading the same way for most of our journey, so we went together. After that day, it became a regular thing for him to wait for me after work, and I did the same thing.

It was funny at first because I’d see him fight for change with the conductor and all of that madness that comes with Lagos traffic. Until one day, while we were walking home, he told me he enjoyed my company, and he’d like for us to hang out sometimes after work.

My life is pretty dull, and my routine almost predictable, so I agreed. That’s how we went on the first date, the second date, and on the third date he asked me to be his girlfriend, but I ran away.

Why did you run?

Because it felt so foreign to me, at that point, I had become used to his company. We had grown past just talking about work; we spoke about any and everything. But for some reason, I didn’t think he’ll ask me to be his girlfriend. In retrospect, I could have seen it coming. We were super close, and people in the office started saying the whole “your husband” talk. But that day I ran away.

When did you know you liked him?

After I ran away, communication with him became cold. We still went home together, but it wasn’t like it used to be. You’d know when you and someone aren’t on the level you were before, and that’s how it was for the both of us. It felt so strange that we were back to being strangers - familiar strangers. Whenever I got home, and I was away from the craze of work, I found myself missing him; our talks, gossips, and hangouts.

At that point, I knew he had gotten me. So, one day during our lunch break, I walked up to him and was like, “Daniel, we need to talk.” He was so confused, but I didn’t care. I confronted him, and he told me he had caught feelings for me and all that blah blah blah. My response was, “Same.” He was so confused. After answering him, I told him we’d see after work and left. That’s when I decided to accept that I liked him.

Did he ask you out again?

Yes o, he did, and it was sweet. We went out for one weekend to the beach, but it was late at night. If you’ve gone to Elegushi at night, you’ll know it’s mostly noise. But he planned with some of the guys there to make something beautiful. There were candles, flowers, food most importantly, and then he popped the question. I felt it was a little too much because we weren’t getting married, but I liked it.

For the first couple of months, it was beautiful. I mean, we had to act like regular colleagues at work, which we laughed about after work hours. I’d tell him about people moving to me at work, and we’d laugh about it. If work were stressing me, he’d send me a message which would immediately uplift my mood. He was that little angel in my corner looking out for me. The fun part was that he would anonymously send me food, and I’d pretend like I didn’t know who it was from. One of my co-workers always had “God when” rolling off her tongue. But they didn't know we were dating at work.

Did you ever get caught?

We went on for a while, but when we started having issues, we couldn’t keep it together. Everything scattered when we fought in the office. At that point, everyone knew we were dating at work.

What caused the fight?

He was all over my business. What started as cute became an obsession. Every time he would text me, “what is going on? Are you fine? Omo, he was so clingy, and I needed to breathe. So one day, when my boss annoyed me, and I got his text. I just walked to his office and started to scream. I don’t know what came over me, but I was yelling at the top of my voice. He was shocked. Throughout our dating period, I had not for once raised my voice at him, but that day I was frustrated.

Was that the day you ended the thing?

No, HR called us both to her office and talked about how we were violating the company’s policy and all that. So we both got a query, but I got a week suspension without pay for fighting at work. I got home that day, called him, and went off. That evening I said things that day that I can’t remember, but I know they were terrible things because he went cold from that day. I apologized one million times, but things did not just go back to normal. It was the sixth month of our relationship, and I guess he was tired. My Wahala can be too much sometimes (Laughs). About two weeks later, he called me and ended things. E pain me, but we move sha.

Would you date your co-worker again?

No! When I’m not mad. It gets tiring. It’s like dating your course mate at the university. There’s nothing to talk about, and it’s like you’re always in each other’s business. You don’t get to interact with other people as much because you’re still with them. Omo, I don wash my hands' commot dating co-workers o.

But you enjoyed dating at work?

Definitely, it was beautiful while it lasted.

Advice for people who are thinking about it?

Don’t try it o. Run away. But they won’t listen any way. So try to have a work life balance. Always take away work from pleasure.

Raed “What the fuck? This is horrible”- I quit my Job after two days