How damaging can the inability to sell oneself be?

2019 was the year that I met someone whose story would forever change how I positioned myself for job opportunities. I wrote about how she went from earning #150,000 per month to over $40,000 per year. But if you had read the article, you still wouldn’t have learned how she truly landed the job that improved her financial situation. In fact, many people who read the article attributed her success to sheer luck and nothing more. But it wasn’t just luck, there was more.

She told me that what made all the difference while interviewing for the role was a series of blog posts she had published on the impact of Customer Success on company revenue. Through these posts, the recruiter had a glimpse of her thought process and was convinced that she had the right skill set for the job. I have always believed that there is nothing random about luck. Yemisi Ajeojo’s tweet further proves this. She wrote, ‘To find luck, publish. Share, share, share’ 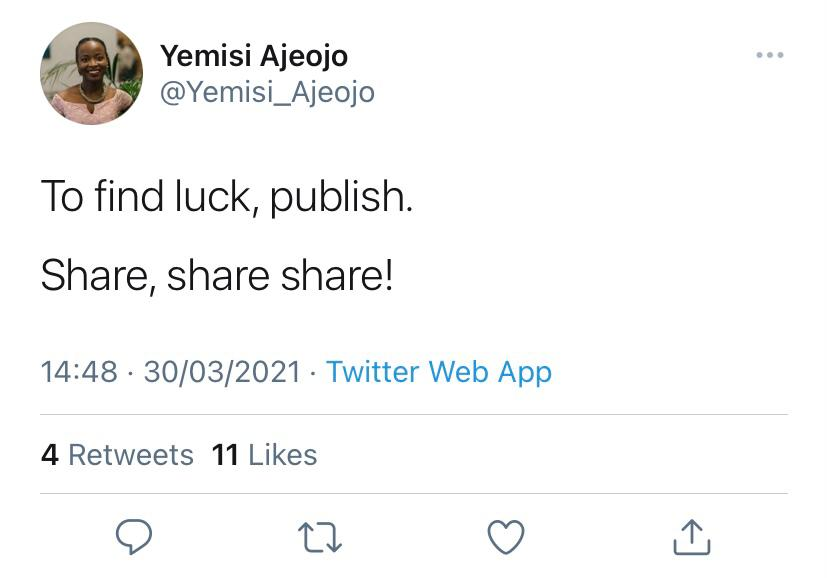 One of the most popular myths about self promotion is that ‘doing great work equals having a great reputation.’ This is similar to the belief that you can rely on your ‘great work’ to speak and open doors for you. But in the age of social media where everyone is expected to present their best selves to strangers, the best known is usually perceived as the best. The idea of self promotion isn’t to boast. It is you presenting yourself as highly competent to other people.

Why bother? Because closed mouths don’t get fed

You may have made it this far in your career based on referrals from a few people that you have worked with, and you can even argue that this model is best for you. That’s good for you. But sooner or later, you’d begin to hear about people that are not as good as you are getting roles that are more rewarding than the ones that come your way. Why is this so?

Because many recruiters are no longer reviewing Cvs

Talent spotting is no longer a game of ‘submit your CV and we’ll reach out to you’. It has become, ‘Hey, who do you know that can handle this role? Send me their CV and a link to what they’ve done’ The average person has about 20 acquaintances and 5 friends. The remaining people are a mix of total strangers and familiar strangers.

You may have been lucky to be an acquittance to someone that’s making the referral. But you shouldn’t aim to be lucky. That type of luck is not sustainable. You want to be the person that comes to mind when someone looks beyond their acquaintance; the familiar stranger whose work they’ve come to learn about due to consistent exposure to your work which shows competence.

In the war for talents, recruiters have increased their investment in social recruiting due to a fast proliferation of social media in our society. Platforms like LinkedIn, Twitter, and Instagram are key to achieving your self promotion goals and positioning yourself as an authority in your chosen profession.

Good luck does not come to you, you find it.

The interesting thing about luck is that it comes in two ways; There is one that is absolutely a product of random unrelated events that cannot be replicated even when the surrounding factors remain constant. For instance, someone getting struck by lightening. The other type of luck is one that meets preparation. It’s the type that’s actively sought after and can be replicated when the surrounding factors remain constant.

The latter is what Yemisi refers to in her tweet. It’s the one that gets you noticed by high growth organizations over and over again. You don’t want to be lucky only once in your lifetime do you?

To learn more about self promotion, and similar tips on career growth, subscribe to the CareerBuddy email list.